History Made as
​Blackwood win the MBA Teams championship

30/7/21 - Blackwood played the final of the MBA teams cup tonight at Panteg House against Croesyceliog. Both teams are closely matched and both teams knew they were in with a chance.
At 5 ends Blackwood had taken an early 5 shot lead but after 10 ends Croesyceliog had brought it to all square. Things started to change then as David's rink took control and it was only Clives rink down, Blackwood lead by 11 shots.
With just 3 ends remaining Blackwood turned the screw and ran out eventual winners by 21 shots, 81 shots to 60 and an all rinks up win.

Blackwood bowlers assist the Rhymney and Sirhowy valley to win their first title since 1985.

The Pride Of Blackwood

Our very own Oliver Witchell has consolidated his place in the outdoor Welsh under 18 side with selection for the national championships in August.
Oliver adds this cap to the indoor honour already achieved back in 2019. The covid 19 pandemic put a hold on his progression but hopefully he can now go on from strength to strength.
Well done Oliver, Blackwood are proud of you.

County U18's Latest Update: Oliver has also made it to the final of the county under 18's following a convincing semi final win at Newbridge.
He now also plays the semi final of the under 25's.
​
Blackwood are also pleased to announce that our 1st team captain Colin Eaketts has been selected to play in the county seniors team.
Well done to Colin who is also our current club Champion.
​

The semi final was played against our old adversaries Bedwas and Trethomas on a neutral venue, at Pontymister Welfare.
Bedwas have beaten us in our two previous meetings so it was with some trepidation  that Blackwood took the green. The game began and Blackwood were quick to adapt to the neutral conditions as after 5 ends we were 7 shots up. At 10 ends we were 8 up and starting to believe.
From then on the game was never in doubt as we stretched the lead to 14 shots at 15 ends. Blackwood turned the screw further in the last 5 ends running out eventual winners by 19 shots.
Top rink on the day with a 22/8 win was Clive Jenkins, Nigel Hurley, Mal Davies and Gordon cook.
​wrong Bias: Brian Keeling.

MBA
17/7/21: RTB Ebbw Vale - Home
Blackwood were pleased to receive league leaders RTB to our green today buoyed up from our semi final win the previous day.
Blackwood certainly fed off that confidence as we led by 22 shots after just 5 ends. After 10 ends we were still 20 shots up, a lead we maintained for the whole match winning 84/64 and gaining 10 points.
Top rink: Dave Witchell, Mal Davies, Mike Davies and Oliver Witchell with an impressive 29/15 win.
GBL
It is a double header this weekend for the GBL side with the 1st match away at Whiteheads.
Blackwood were never really in contention as Whitehead led by 15 shots at the mid way stage. This 15 shot deficit was to be maintained throughout with Blackwood eventually losing  by 44.5 shots to 29 with all 3 rinks losing by just 5 shots.

In the 2nd game of the weekend Blackwood had a tricky away trip to Abergavenny Avenue in what was to be the closest fought game of the weekend. the 1st five ends saw Blackwood trail by 4 shots but by 10 ends it was all square. At 15 ends we were just 1 up and things were looking ominous. however, a fantatic rally from all 3 rinks saw Blackwwod win by 4 shots and gain 11 valuable away points.
The highest winning margin was just 2 shots by Kevin Meek, Keith Williams, Paul Dury and Paul; Thomas.
The most shots scored was just 15 by Allen Witchell, Mel Tudball, J. Hinksman and Geoff Tuball winning by just 1 shot.
​Wrong Bias: Geoff Ford.

RSVBA
28/7/21: It was all square at the top of the league as Blackwood travelled to New Tredegar. New Tredegar are bottom of the league but that was not to be taken for granted. Although Blackwood won on all rinks, 3 rinks were very close and could have gone either way.
Top rink: Allen Witchell, Kevin Meek, Gordon Cook, Oliver Witchell

Up and Coming Events:

Blackwood are inviting bowlers of all standards to come and join us. We have a club coach and some senior members who are happy to run coaching sessions for beginners free of charge and we welcome both men and ladies to attend.
We also hold function nights, BBQ's and charity events as well as the annual club tour so...
Come and be part of this forward thinking, progressive club.
Click to Contact us

Visitors to Blackwood in 2021 will experience a large out door seating area as Blackwood have doubled the size of the patio. With tables and chairs laid out in this secluded private area it is the perfect place to watch the bowls or just sit and chat in comfort on how well you are playing or to criticize the skips.

Blackwood have also fitted a new kitchen with work tops, new oven and induction hob which will improve our catering capabilities.
​
The bar area has also had a minor face lift for a more professional feel to the room.

​​Probably the most exciting development for 2021 will be the finished construction of a pergola seating area which will be situated to the side of the green and measure 3m x 10m. This will provide a covered area for spectators to sit and watch the matches in warmth and comfort.
The area will also be used for social events such as garden parties and BBQ's.
Click here for the Pergola project gallery 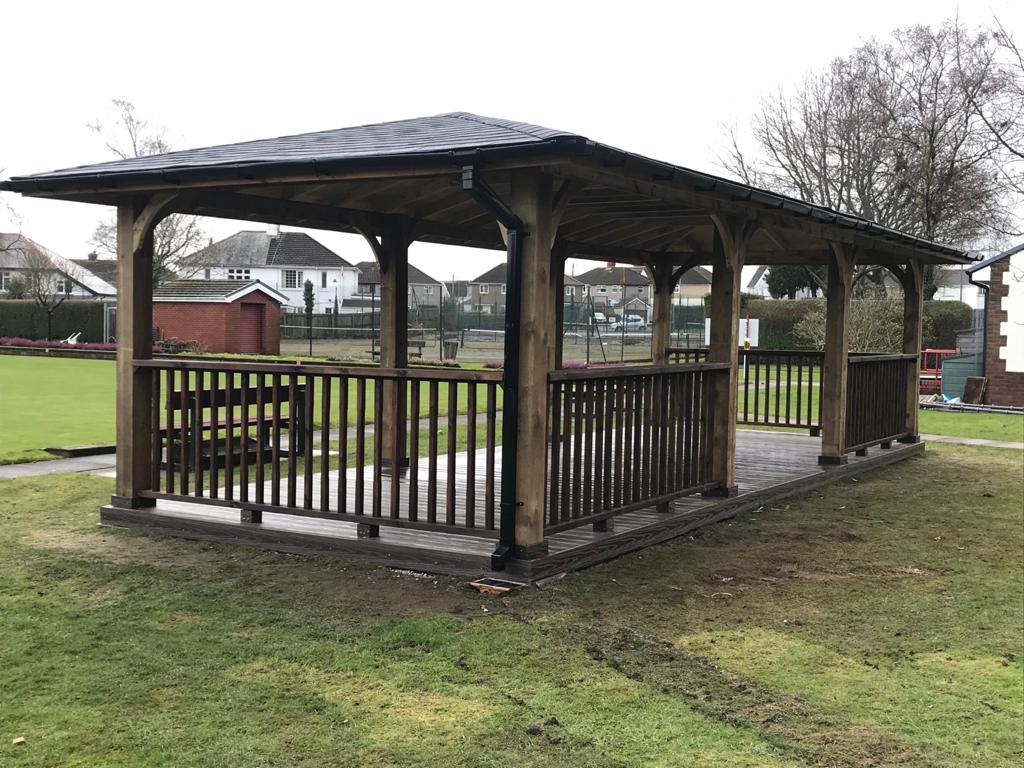 Thinking of joining us or just having a go?
Green opens 17th April to mid September......
​
Monday evenings have been designated as club nights with members up at the green from mid afternoon until 8pm. David Witchell is the official club coach and will be available on request to iron out any problems or help out a new bowler,
There is a member at the green from 3pm - 7pm Monday - Friday & 2pm - 6pm on weekends.
Blackwood welcomes all new members of all abilities as we have a busy fixture list.

Come along and have a go!
contact us
TOP